The Stonewall riots were a series of violent demonstrations by the LGBT community against a police raid that took place in the early morning of June 28, 1969 at the Stonewall Inn in the Greenwich Village, New York City. It is considered to be the most important event leading to the gay liberation movement and the fight for LGBT rights in the United States.

Very few places welcomed openly gay people in the 1950s and 1960s. Those that did were often bars. The Stonewall Inn was owned by three Mafia members and it was turned into a lgbt bar in 1966. It was popular among the poorest and most marginalized people in the lgbt+ community: drag queens, transgender people, effeminate young men, butch lesbians, male prostitutes, all of who were often black, and homeless youth. Once a week a police officer would come and collect envelopes of cash as a payoff. The Stonewall Inn did not have liquor licence and there was no running water and fire exits. It was the only bar for gay men in New York City where dancing was allowed.

Visitors of the Stonewall Inn were greeted by a bouncer who inspected them through a peephole in the door and to avoid unwittingly letting in undercover police, visitors would have to be known for the doorman or look gay. The customers were mostly gay and transgender women but sometimes a few lesbians came to the bar. Younger homeless males would often try to get in so customers would buy them drinks.

At 1:20 a.m. on Saturday, June 28, 1969 four policemen arrived at the Stonewall Inn´s doors and announced „Police! We are taking the place!“ The music was turned off and lights were turned on. Approximately 250 people were in the bar that night. A few people who realized what was happening began to run for doors and windows in the bathrooms, but police barred the doors. The raid did not go as planned. Standard procedure was to line up the patrons, check their identification, and have female police officers take customers dressed as women to the bathroom to verify their gender and any men dressed as women would be arrested. Those dressed as women refused to go with the officers and men in line began to refuse to show their identification. Those who were released from the front door did not leave quickly as usual. Instead, they stopped outside and a crowd began to grow and watch. Within minutes, between 100 and 150 people had congregated outside. 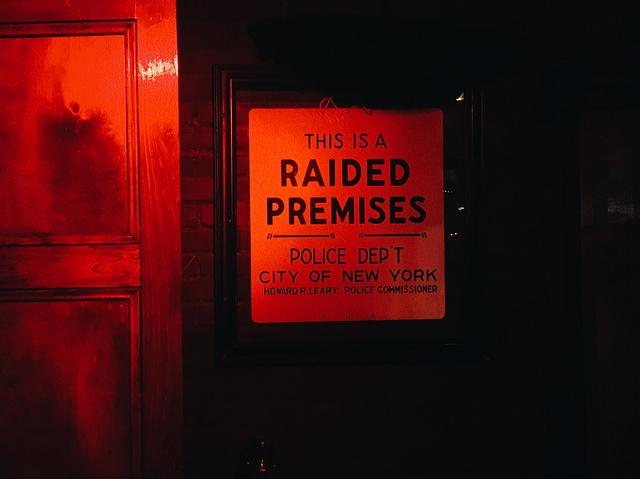 A scuffle broke out when a woman in handcuffs was escorted from the door of the bar to the waiting police wagon several times. She escaped repeatedly and fought with four of the police. She was hit on the head by an officer with a baton. She sparked the crowd to fight when she looked at bystanders and shouted „Why don´t you guys do something?“. After an officer picked her up and heaved her into the wagon the crowd flow into a rage and that moment the scene became explosive.

The police tried to restrain the crowd, and knocked a few people down, which incited bystanders even more. The crowd tried to overturn the police wagon and beer cans were thrown towards police. The police, outnumbered by between 500 and 600 people, grabbed several people and barricaded themselves inside Stonewall Inn for their own safety. Garbage cans, rocks and bricks were thrown at the building, breaking the windows.

The Tactical Patrol Force (TPF) of the New York Police Department arrived to free the police trapped inside the Stonewall and they attempted to clear the streets by marching slowly and pushing the crowd back but the mob openly mocked the police. By 4 a.m. the streets had nearly been cleared. Many people gathered nearby in Christopher Park throughout the morning to talk about what had happened.

The next night, rioting again surrounded Christopher Street. Many of the same people returned from the previous evening and they were joined by curious bystanders and tourists. Remarkable to many was the sudden exhibition of homosexual affection in public. Thousands of people had gathered in front of the Stonewall. The steam of people surrounded buses and cars, harrassing the occupants until they admitted they are either lgbt+ or showed their support for the demonstrators. As on the previous evening, fires were started in the garbage cans throughout the neighborhood. More than a hundred police were present, but after 2 a.m. the TPF arrived again. Kick lines and police chases waxed and waned; when police captured demonstrators, the crowd surged to recapture them. Street battling ensued until 4. a.m.

After the Stonewall riots lgbt+ people in New York City faced gender, race, class and generational obstacles to becoming a cohesive community. Withing 6 months, two lgbt+ activist organizations were formed in New York and three newspapers were established to promote rights for the lgbt+ community. On June 28, 1970 the first lgbt+ pride marches took place in New York, Los Angeles, San Francisco and Chicago commemorating the anniversary of the riots. Today, Pride Parade events are held annually throughout the world toward the end of June to mark the Stonewall riots.